Sorry for those followers that I havent updated in a while. I felt no motivation to add updates after the news broke that my high school, Cardinal Gibbons, which I'm currently a junior at, will close at the end of the tear. After the upsetting news that I will not be able to graduate from there, I have finally decided that I wanted to update my blog. So I have a big @$$ update for you. (It will be in multiple posts) 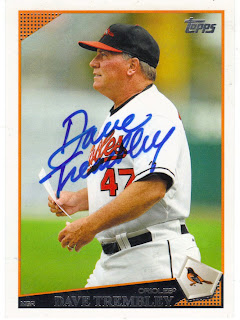 Dave Trembley signed 1/1 2009 Topps in 10 days c/o Orioles ST. Dave is the hopeful leader of the O's. Good luck Dave, Lead us to the Playoffs! 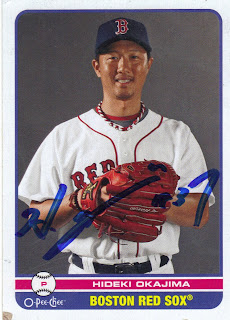 Hideki Okajima signed 1/1 2009 O-Pee-Chee in 20 days c/o Red Sox ST. I don't particularly have any likeness for the Boston team or most of its players. But Hideki is one of those players who I dont dislike that much. Regardless, I try to collect autographs on as many of my cards as possible. I have another autograph of his on an index card, but I wanted to get this card signed. 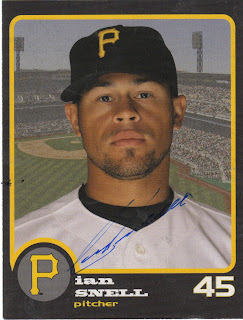 Ian Snell signed a Pirates photocard c/o Mariners ST. The main reason I sent to Snell was to upgrade my 08 Topps signed horribly in silver. This one didnt turn out that good either. 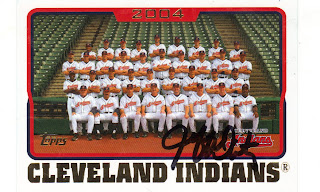 Jeff Datz signed indians team card from 05 Topps c/o O's ST. Datz is the O's new bench coach, replacing Dave Jauss after 2 seasons with the Birds. Now, I dont have to focus so much on Datz during the season for my 2010 Orioles Autograph Project. But i would like to get an signed Orioles item or an item featuring just Jeff Datz in the pic. (Also did anyone notice how many Jeff's I have gotten TTM since I started this blog?) 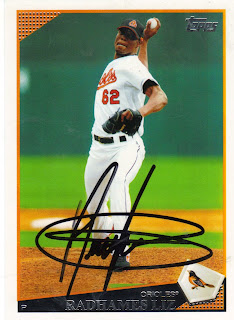 Radhames Liz signed 2009 Topps c/p Padres ST. Liz was claimed off waivers by the Padres from the O's shortly after the 2009 season concluded. This was the one remaining unsigned card I had of Radhames. So naturally I sent to him....and Voila!

The next posts will include a Wal-Mart card purchase and some other non ST TTM autographs. Stay tuned
Posted by JoesAutographs at 4:36 PM No comments: 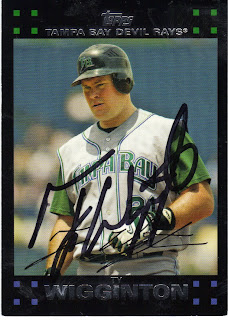 Ty Wigginton signed one card in 12 days c.o Baltimore Orioles ST in black sharpie.
Ty had a dissappointing year for the Birds last year. It was his first year in four in which he didnt hit at least 20 homers. I'm hoping he can bounce back this year and be a good righty power bat of the bench.
Posted by JoesAutographs at 6:30 PM No comments:

A Contest and New Successes!!!

There is a ST contest going on at The Great Orioles Autograph Project. You pick a team in ST who you think will have the best record, the winner will win his/her choice of different card, autographs etc. It gets even better if you link to his blog on your blog, or if you are a follower of his blog (or both) Check it out for a chance to win. http://greatoriolesautographproject.blogspot.com


Today I received two Spring Training TTM Successes and a purchase from a member on Sportsgraphing.com. Let's begin... 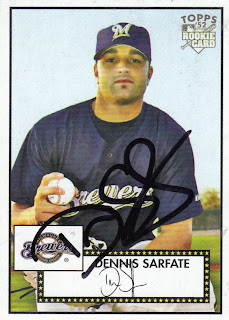 Dennis Sarfate signed one card in black sharpie c/o The Baltimore Orioles ST in 11 days. Dennis was acquired by the Orioles in late 2007 in the miguel Tejada trade, and after an injury shortened 09, he was DFA'd to make room for Miggi. I was happy to hear that he cleared waivers and was invited to ST. The reason, I had one card of him that I really wanted signed. I am rooting for Dennis to land a spot in the crowded Orioles bullpen. 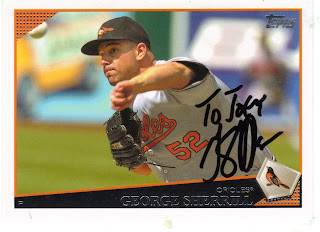 Count me as a person who though the Sherrill/Bell trade was bittersweet. I like Bell, but I wish we didnt have to trade George, because Flat Breezy was a well liked fan favorite. I still had some unsigned cards of George that I wanted to get signed, so I sent to him. George Sherrill signed one card in black sharpie c/o The LA Dodgers ST in 11 days. 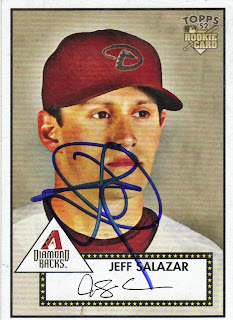 Last year, I made a project to collect at least one autograph from every player and coach that wore an Orioles uniform in 2009. I plan to do the same thing in 2010. I like to have autographs of guys that were ST invites and wo could surprise and make the team or be called up do to injury. So this is where Jeff Salazar comes in. Jeff is an Orioles ST invitee, an will probably play at AAA Norfolk this year, but he may be a callup in September, so I like to have it as security and to add another new 'graph to my collection. Jeff Salazar 2007 Topps Heritage in blue sharpie c/o purchase.
Later today I may post the other 2010 graphs I have received prior to this blog.
Posted by JoesAutographs at 4:47 PM No comments: