This Past Week's Non-ST TTM Successes

As I said in my previous post, I had some TTM successes this past week that weren't from a ST sendout. I received 3 non-ST returns this past week, 2 of which were very long waits. 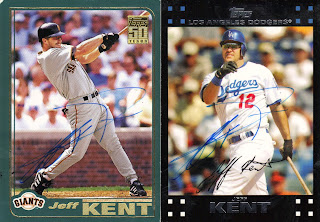 Jeff Kent signed 2 cards in thin blue sharpie in 4 months c/o Kent Powersports. I already had a Kent TTM autograph, an Astros card. But I wanted ones of him on the Giants and Dodgers. As you can see, I was successful. I'm glad to add two more autographs of this potential future HOF'er to my collection.

Jeff Kunkel (3 Jeffs in the same week, weird coincidence) signed 3 cards in over a year c/o home in black sharpie. Jeff was an average major league baseball player during his career, never played for the Orioles, and I already had his autograph from a previous TTM success. So you may ask, "Joe, why would you want another one, yet alone 3 more?" I have two answers. 1. He is a good TTM signer (even though this letter was probably misplaced because he signed in 9 days last time), so he is a slump buster. 2. I know a guy whose name is Jeff Kunkle, and I think it is funny how they have VERY similar names, and its just one of those funny autographs. 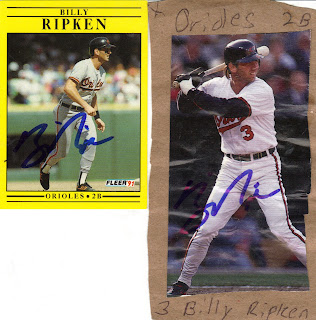 And now the longest wait. Billy Ripken signed 2 cards c/o home address in over 2 years! This was one of my longest waits ever, and Ive been doing TTM consistently since 2006! This was also a very sentimental request. One of the cards Billy signed was a homemade card that I made when I was eight years old. It was the 3rd of those cards I made (David Segui and Scott Kamieniecki are the others) and having that signed is special to me.
Posted by JoesAutographs at 1:35 PM